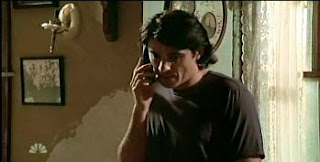 "Luka, it's so good to hear your voice. How's Joe doing?" As he shifted the phone from one ear to the other, there was no denying that Abby's voice held a sadness to it that betrayed the forced lightness in her words.

"He's good, Niko took him to the market with him. We miss you." If only she knew how much. The thought followed his words before he could catch it.

"How are you doing? Are you coming soon?" There were so many questions he wanted to ask her, so many more he knew he didn't dare ask.

"I don't know, this isn't easy." She didn't want to talk about her rehab, she didn't want to think about the mistakes she'd made that had resulted in her being where she was instead of with her husband and son.

"I know, it won't be much longer though, you'll be here, and I can show you all the places I've wanted to for so long." As he spoke, Luka reached for a book that sat on the table beside where he stood. The leather cover was cracked and worn, the gold embossed title long ago faded. As he opened it, he withdrew several yellowed sheets of folded paper.

"I've been thinking a lot about all the time we've spent apart. We're not the first to go through this, what we have, you, Joe, and I, nothing can take that from us." As he unfolded the papers, his eyes scanned the cramped handwriting, his words echoed by the author's so many years before. How many other marriages had been tested as they were being tested now? How many had failed to overcome the obstacles of distance, of lives changed by those very same separations? How many others had been strengthened by those challenges? How many had survived to grow old and die together? As he turned to the last of the pages, he was disappointed to find they held no answers to his questions. Had these two been among those to survive their time apart? The answer was one he would never know, but, he could fight to save what he and Abby had.

"Luka, are you still there?" Abby's voice broke into his thoughts, bringing him back to the conversation.

"I have to go, I'll call again tomorrow if I can, kiss Joe for me." As much as she wanted to respond to his words, Abby knew she couldn't not this way, not on the phone.

"I will, I just wish he was here so you could talk to him." He hated having to say good-bye to her, because no matter how long they spoke, it was never long enough.

"I love you so much, Luka, please don't give up on me. I have to go." There was no ignoring the break in her voice, and despite the distance that separated them he knew she'd been brought to tears.

"I love you too, Abby." Had she heard him? The dial-tone in his ear made him wonder if his words had come too late. She had to know, even if the call had ended too soon. Why did it have to be so hard? The question reminded him of the notes he still held, and he couldn't help but wonder, had she too asked that question all those years before?
Posted by AzizalSaqr at 11:25 PM