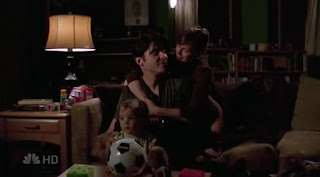 We almost threw it all away because of stupid mistakes we'd both made. Before we made the decision to leave Chicago, Abby and I weren't even sure our marriage would even survive everything we'd been through over the last year. Here we are though, in a new City, with new jobs, new friends, a new life, and as difficult as it has been, we're finding ways to let the pain we caused each other go.

When the news first came of my father's illness, there was no question that I had to go back to Croatia to see him. If I had been thinking with a clear head, I'd have done whatever I could to take Abby and Joe with me. I wanted so badly for him to meet them, to know them and love them as much as I do. After everything happened, I couldn't help but wonder if it all couldn't have been prevented if only I'd waited for Joe's passport. If Abby and Joe had been there instead of Chicago, she'd never have become so overwhelmed by what was happening with her life. She'd never have started drinking again, she'd never have put our son's life in danger, she'd never have cheated on what we had with her boss. All of those things that came from my being gone so long could have been prevented.

It was hard coming home and feeling something wasn't right, then, learning the truth of what my absence had cost us. How do I reconcile myself to knowing that while I was worrying about whether my father would live or die, she was trying to escape from everything in a bottle. How do I apologize to my son for abandoning him for my father, because in a way I know I did just that. For almost 6 months I left him, and all I could teach him, to be at my father's side, even knowing there was little I could do for him. But, even knowing that, how could I not? He was still my Tata. He was the one who had nursed my bruises when I'd fallen as a child, the one who'd soothed the demons of my nightmares. He'd been the one to try and ease the pain the loss of my family had cost me, and hardest of all, he'd let me go when I knew I could no longer stay in Croatia and face all of the reminders of those losses.

I couldn't have known my being with him would almost cost me this family, but, even if I had, how could I possibly choose between them? How could I say one was more important to me then the other, when in truth I needed both to be who I am. Abby and I are still not fully back where we once were, but, everyday seems to find us closer, and I no longer fear that we'll lose what we have. We're a family, and we're in this for forever, I'm sure of it now.
Posted by AzizalSaqr at 2:18 PM