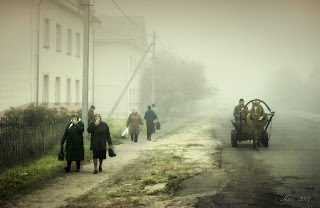 "Luka, come to the market with me." Josip Kovac stuck his head in his youngest son's room as he made the request. It had been three weeks since Luka had found his way back to them, and in that time he'd barely left the spare room he now called his own, let alone the house.

"Tata, no." Rolling to his side, he turned his back to the door.

"Son, you can't live the rest of your life like this." It took everything the man had in him not to approach the bed. He knew his son was grieving, he knew his son needed time, but, it had already been nearly six months, and if he didn't start finding his way back from the dark place he was living in.

"Tata, please, just leave me alone." The pain in his son's voice ripped through the man's heart. It would be so easy to do as he asked, to leave him with his memories, with the photo of those lost to him forever.

"I can't, Luka, I'm sorry, I love you too much to let you do this to yourself anymore." As he finally reached his limit, Josip Kovac approached the bed and took a tentative seat on the edge before gently touching his son's shoulder.

"Danijela wouldn't want you living like this, you know that, Luka." As he felt the tremble under his hand it was all he could do to remain as he was.

"Do you remember how much Jasna enjoyed going to the market with us when she was little? How she would eat so many strawberries her face would be stained red, and Danijela would pretend to be so angry when we got back?" As impossible as it seemed he couldn't help but laugh as the memory surfaced.

"I miss them so much, Tata." For the first time since his father had entered the room, the younger man turned to face him.

"I know, Luka, you always will, but, it'll get easier, I promise. Now, go wash your face and put on a clean shirt, we'll go to the market and maybe if we're lucky, we'll find some strawberries to bring back." Extending his hand, he brushed the tears from his son's cheeks with his fingertips.

"It'll get better, I promise, now go, I'll wait for you on the front step."
Posted by AzizalSaqr at 6:22 PM