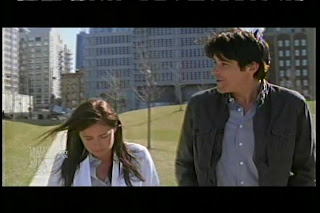 Even after they had ordered and their meals had arrived, Luka found the feeling that had started as they left the movie theatre growing stronger. As he picked at his food with his fork, it was hard for Abby to ignore it any longer.

"Is something wrong with your meal?" Abby paused with her own fork in mid-bite as she asked the question.

"What?" He blinked, bringing her into focus as he realized that he was so lost in his own thoughts that he hadn't even really heard what she had said to him.

"You're not eating. I asked if there was something wrong with your meal? " She gestured to his untouched plate with her fork.

"No, it's fine, why?" As if to prove it he placed a bite of fish into his mouth.

"Nice try, but, I don't think so. What's going on, Luka?" It was Abby's turn to stop eating now, and as she made the decision to do so, she lay her own fork on the side of her plate.

"I don't know." As he answered Luka shook his head before again beginning to push the food on his plate around with his fork again.

"I just...something isn't right, I can't explain it." Catching her look at what he was doing, he forced himself to take another bite.

While she couldn't say she understood what Luka was feeling, neither was she willing to write off his feelings as nothing and after a moment she removed her napkin from her lap and wiped her mouth.

"Do you want to go?" She met his eyes firmly with the question once the decision was made. "We can take this home."

"You're sure, you don't mind?" The question was almost unnecessary and as she asked it, relief seemed to wash over his face.

"I don't mind." As she replied she found a small smile for him, hoping that he might find some additional reassurance in it. "Why don't you go pay the check and I'll have the waitress box these for us."

"Okay." With the decision made Luka rose and started for the cashier. What happened next would be something he would remember little of save for random flashes, screams of terror and then a feeling of intense pain before blackness claimed him.

to be continued...
Posted by AzizalSaqr at 9:42 PM