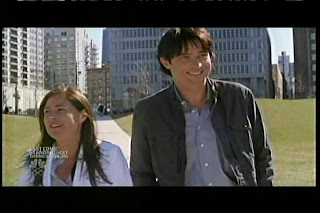 "So." Abby looked over at Luka as she started to speak.

"So? What?" His smile surfaced again as he tried to figured out what she was going to say before she began.

"I was just thinking about how long it'd been since we had a date-night." As they walked down the sidewalk Abby found herself matching her pace to Luka's, a task made easier as he shortened his stride for her.

"Long time...before Joe was born." As if he needed the words to remind him Luka fished his cell-phone from his pocket. "Should call and see how things are going."

"Luka, We're only been gone two hours, he's fine, besides, I thought we already decided we weren't going to call. Plus, Louise knows how to reach us if there's a problem." Abby reached for his hand, only to squeeze it in reassurance as she spoke.

"Something doesn't feel right, I can't explain it." He returned the squeeze as he smiled down at her, but, the smile faded even before it fully developed.

"Do you want to go home?" Stopping in mid-stride, Abby studied his face, the change in his mood becoming contagious.

"No, that's okay, I'm sure you're right, he's fine and Louise would call if he wasn't, let's go ahead and go to the restaurant." Even as he made the decision the feeling lingered, something was off, he just couldn't put his finger on what, he could only hope that he was wrong, that it really was nothing and that dinner would pass uneventfully.

to be continued...
Posted by AzizalSaqr at 5:30 PM