Step Two: 4. "When we forget God, He remembers us." L.M. Montgomery/aamuses 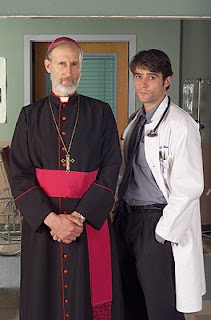 For almost ten years I turned my back on the Church. I denied my faith, but, if I am ashamed of one thing more than all others, it is the hate I held in my heart toward God for taking Danijela and my babies from me.

I was raised a Catholic in a country where religion plays a very large part in our lives. I  remember as a child going to Church with my Mother and being mesmerized by the music, and I sometimes think if I hadn't become a doctor, she would have wished either my brother or I had become a Priest. It didn't happen for either of us, but, our faith still played a large part in our lives. It was as natural a part of who I was as breathing or eating, and if someone had told me I would ever think differently, I would have called them crazy.

When I met Danijela, it was a surprise to no one to find that she too was Catholic, and as we discussed our future, there was no doubt that our children would be baptized and raised as Catholics as well.  I don't know that either of us thought about how much our faith meant to us, or even influenced our lives until the war began, and then we found ourselves calling on it for strength far too often.

On the day our apartment building was hit, I prayed more then I had prayed at any time in my life.  God had already taken my baby boy from me, I'd seen him the moment I'd entered the ruins but, he could still save my little girl, he could still save my beautiful Danijela. For hours I did CPR on Jasna, knowing that if I stopped I'd lose her as I'd already lost little Marko, too late I realized that my wife was bleeding out, and when exhaustion finally forced me to stop, she was gone too.  Why had God deserted us? What terrible things could my family have done to cause him to desert them when they needed him so desperately?

I buried my family on a cold November morning.  There was no one there but the Priest and myself, and on that day I swore I would never again set foot in a church.  If he cared so little for us then I wanted nothing more to do with him either.  Feelings of hate began replacing my faith, and if I prayed for anything in those final days before I realized the futility of it, it was only that he would find some way to claim my life so I could once more be with my family.

It neverhappened though, and for over nine years I wandered lost, and alone.  In those years I turned my back on everything that reminded me of those I had lost, everything that made me feel anything but my anger. I survived that way for nine years and I'd almost convinced myself that I had succeeded until that day I met Bishop Stewart, and somehow he found a way to see inside me.

Some would say God sent Bishop Stewart to me, the Bishop himself felt it was his calling to take the pain I had carried inside me for so long with him as he moved on. I'll never know how he knew all he did about me, how he saw what I thought I concealed so well, but, in time he opened the door I had closed so long ago.  On the day he offered to hear my confession, I admit to being afraid, I'd told no one all I had gone through that day.  I'd kept that nightmare for my own, and now, he was asking me to turn it over to him and the man I had held responsible, and I did.

How do I describe the feelings I felt when it was over?  Relief, sadness, loss, they were all there, all but the one I had held so tightly for those nine years, the blame was gone.  Finally I saw things through his eyes, the hopelessness of it all, there was no way I would ever have been able to choose one over the other so all he could do was take them both. It's my destiny to live so that their memories stay alive, and that too was a piece of the puzzle I'd failed to remember.  More importantly, I was meant to live for those who were still to come, for Joe, for the life I would one day have with he and Abby, God knew that even as I was grieving for my first family.

I'm reclaiming my faith now, slowly, small pieces at a time, and while it may not work for Abby, it's a part of who I am, who my family was, that I want to share with my son.  We baptized Joe when he was still in the NICU, one day I'll explain all that to him. I'll share other parts of the Church with him as well, and as my Mother did with me, we'll go to Mass, and maybe, just maybe, he'll enjoy the music as I did, and within it, he'll find his faith, and know about the special angels that I'm sure are watching over him.