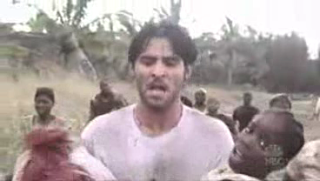 006. Bravery is the capacity to perform properly even when scared half to death. --General Omar Bradley

"Luka, we have to go!" While the gunfire outside the small African clinic made Carter jump, it seemed to have little if any affect on the tall Croat as he continued with the amputation of the leg of the small girl on the table in front of him.

"Not yet, take the others, I can finish up here. I'll follow with Chance when I'm done." Despite his efforts to conceal it, the tremble in his voice betrayed his own fears on the danger of their current situation.

"We're not leaving you." Carter stood firm even as he spotted several soldiers, with their rifles at the ready, cross the yard outside the window. "We won't have long and they'll be inside."

"I know, Carter, but, if I don't get everything closed before I move her, I risk losing her. I'm not taking that chance if I don't have to." Kovac's irritation toward the younger doctor was growing as the man persisted. Did he really think he wasn't aware of what was happening outside and the risk he was putting them all in by not stopping the surgery immediately? Hell, if Carter could get past his own fear he would see there was no choice in finishing, he reached for more gauze in an attempt to clear the field of the rapidly pooling blood.

"Luka!" Carter reached of the IV as the gunfire and yells outside signaled that they were now directly involved in the battle. "It's now or never, we take her as she is or they'll kill her and us."

"Damn." Kovac tied off his last stitch before hastily wrapping what remained of the young girl's leg. It would have to do. "All right, I've got her, give me the IV and let's go." After wiping his hands on the already bloodied towel on the cot, he scooped Chance up into his arms.

"Run!" As he hit the back-porch he heard the sound of the clinic's front door being forced open, it was all a number's game now, for all of them.
Posted by AzizalSaqr at 9:35 PM