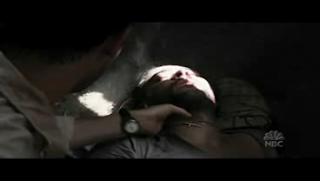 I'm not sure how much I ever believed in talismans until I went to the Congo and found my life spared by something as small as the crucifix that Sakima had insisted I take with her gratitude. She and her daughter had nothing but the clothes on their backs, yet she demanded I take something so personal, and I was at a loss for how to refuse her.

For so many years I had turned my back on the church and there, in that place, seeing what I saw, knowing that Patrique sacrificed his life in an attempt to save mine, how could I do anything less than grab for it again. I was raised to believe that my faith would protect me, but, there, in that place, it seemed so impossible to believe. I tried to sense God's presence, but, all I could feel was the fear around me, and as one by one those kneeling with me were led to their death's I began to doubt he was near. And then I was alone.

How do I begin to explain the dread I felt when I realized that I was the last one there in that compound? It didn't seem to matter anymore if I remained kneeling, what more could they do to me then what I knew was to come? For the first time in hours I simply sat and tried to resolve myself to what was to come. I was beyond thinking about what would happen to Sakima and Chance, my own death was imminent, and I needed to make my peace with it.

It was only as I once more climbed to my knees that I began to hear the music, and somewhere deep inside of me I found comfort in that. Despite all my years away the prayers came back to me easily and as I whispered them for my comfort, the world around me seemed to fade away. I was sure then that it wouldn't be long and I would once more be reunited with Danijela and my children and we would once more be a family. How could I have have known that a simple crucifix held the power to change everything.

I wasn't aware that I'd drawn the attention of the Mai Mai, I wasn't aware that the sight of the crucifix around my neck would prompt Sakima to put my life above that of her own life and that of her daughter's as she fought to save me. I only know that one moment I faced death, and then sometime later I woke in a tiny hut, fevered, amid stifling heat, but, somehow still alive. I'll never know for sure what might have happened to me if it hadn't been for that crucifix or for those who put my life before theirs, I only know I will never be able to repay them for the sacrifices they made to save me. I'm forever in their debt.
Posted by AzizalSaqr at 8:31 PM