A Day at the Beach/ Writers Muses 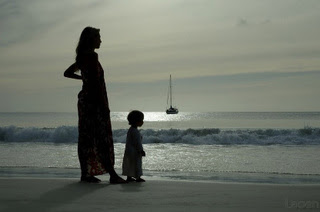 How were they supposed to make a decision like this? Their families were here, Jasna wasn't even two, and still, he was expected to take them away from everyone and everything they knew so he could go to school in Vukovar. He'd brought them to the beach as a treat, a way of making up for all of the hours he'd left them alone already. At least here Danijela could call her sister or mother when she needed company, or when the baby became too much for her, at least here she had her friends.

Watching the two of them now as they stood at the water's edge he couldn't help but feel selfish. What right did he have to demand so many sacrifices of them? Maybe he should talk to Danijela about staying behind, she and Jasna could move in with either of their parents, and as hard as it would be to be away from them, he could go to Vukovar alone. How long would they be separated, a few years? They'd have a lifetime to make up for that, and in between he would find a way back to visit as often as he could.

"Luka, aren't you coming down to the water?" Danijela's call drew him out of his thoughts and he looked up in time to see his daughter running to him.

"Yeah, I'm coming." Shaking off the remainder of his concerns he rose and scooped Jasna up as she reached him, holding her high over his head as she squealed her delight. The discussion would be there when they they got home, today was meant for happier thoughts. As he settled the toddler on his hip he gave her a kiss.

"Ready for a swim? Let's go see Mama." His smile broadened as he reached his wife and as soon as he embraced her it was as if his earlier worries were nothing more then smoke, gone with the wave of a hand. As he lowered Jasna to the sand he was sure whatever decision they made would be the right one, they were meant for each other, they'd known it from the moment they'd met, and nothing could change that.
Posted by AzizalSaqr at 8:02 PM