Nothing haunts us like the things we don't say." - Mitch Albom, Have A Little Faith/Creative Muses 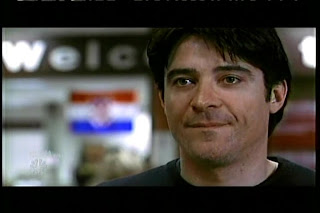 "Luka, do you want to talk about it?" Niko glanced over to his brother, only to then lay his hand on his arm, as his face reflected his concern for his younger brother.

"Not yet, I still don't even know what I feel about things." As he spoke, he shifted Joe's weight, on his shoulder. How was he going to explain any of this to his son? First he disappears from the boy's life for close to six months and now, not only is his mother ripped from him, he's being taken to a Country where he barely understands, let alone speaks the language. The thought prompted him to place a kiss on the toddler's fair hair before his hand began to rub his back.

"Do you want me to leave you alone?" In the quiet of the airplane cabin, the Croat shifted to their native language without thought.

"Maybe, I don't know. I wanted Tata to see him so much, to see them both, to know I'd finally found happiness again, and now I don't even know if anything of what I thought I had exists anymore." His voice broke as he tried to explain that which he had yet to even attempt to try and make sense of.

"Give it time, you still have your son, and Abby, you can make it all good again. I know you, you have that way about you, you've always had it, even when things were at their worst." Niko's grip on his brother's arm tightened as he spoke.

"I don't know if I can do it again, Niko. It took so long for me to get here, now, to have it all fall apart." Nothing could have been done to the tears that started to slide down his cheeks as he confessed his greatest fear.

"You don't know that, that's what's going to happen, she's going for help, things can still be fixed." Niko struggled to find a way for his brother to find some shred of hope to grab hold of. Something that would keep him from sinking back into the depression that had held him hostage for so many years after the deaths of Danijela and the children.

"She could have killed Joe, I could had lost him like I lost Jasna and Marko." Luka's voice choked in his throat and for a moment he buried his face in his son's hair.

"But, she didn't, and you didn't, he's here, with you now, and you're not going to lose him, I promise you that." It was Niko's turn to cry as he thought about the effect just such a loss would have cost his brother, and he hurriedly wiped the tears away before Luka lifted his head again.

"How do I blame her when I'm no better then she is?" Luka's eyes held as yet unspoken pain as he asked the question of his elder brother.

"I don't understand?" Niko's expression shifted to confusion as he tried to make the jump with Luka.

"Before I went to the Congo, I did things far worse then anything she could have done. I almost killed a med student with my carelessness for God's sake, how can I say her drinking is worse than any of that?" As their conversation continued in whispered Croatian, Luka threaded his fingers idly through the fine locks of the small boy on his lap's hair.

"Luka, look at me. It's too soon for any of this to make sense, we need to take care of things with Tata, then, together, you and me, we'll talk it through. You don't have to do this alone. You're not alone anymore, you have to remember that, you're with family now." Without thinking Niko leaned over and kissed his brother's cheek. "After all these years, don't think you're getting rid of me again."

For the remainder of the flight Niko left Luka to his thoughts and it wasn't until they had landed in Zagreb and Joe had been bundled off to bed under Niko's wife Ivka's watchful eye that the two men again sat down to talk.

"Beer?" Niko nudged Luka out of his thoughts with the tap of the bottle to his shoulder.

"Hmm? Oh, thanks. Is Joe in bed?" Luka stared at the bottle as if he wasn't really sure what to do with it.

"Yeah, already asleep, if you're not careful, Ivka will have him spoiled as badly as Rajka and Maki are." Niko couldn't help but chuckle at the image his own words brought to his head.

"Luka, it's a joke, now, drink up, you'll feel better." Niko slapped him on the back as he took a seat on the patio beside him.

"Sure, get me drunk so I'll feel better about my wife falling off the wagon, good plan, Niko." The straight-faced delivery of the words cause the elder Kovac brother to choke on the swallow of beer he'd just taken and it took several moments of coughing before he had his breath back and was able to respond.

"I didn't mean... Luka, I didn't think." Niko sputtered his apology in vain before Luka waved his hand to free him of it.

"I don't want to talk about it, or think about it, not now anyway." Without thinking Luka took a drink of his beer.

"The house will be full tomorrow, are you ready for that?" The transition from Luka's problems to the events surrounding their father's funeral came naturally.

"No, not really. I know what'll come, whether they mean it to or not, and it won't be a day just about Tata and his memories. People will look at Joe, they compare him to Jasna or Marko, they say, can't you imagine how they would look now? Only I don't want to think about those things, I don't want to imagine all they things he will do that they never had a chance to." As anger rose in his voice he stood and heaved the bottle across the stone courtyard.

"Luka, stop, don't do this to yourself, not again." It was Niko's turn to get angry. "For once think of someone beside yourself, Joe needs you. You can't let this eat you alive, and I swear, if I have to stay on your back every minute of every day to see that it doesn't just for his benefit, that's exactly what, I'll do. Do you hear me, little brother?" Climbing to his feet, Niko moved to stand in front of the taller man when he failed to respond.

"Yes, I hear you." Luka released a sigh as resignation settled in, at least for tonight he was willing to give in, whether he could continue to do so would remain to be seen, whatever happened though, the next sixty days would be long ones.

Standing at the airport in Dubrovnik, waiting for Abby to arrive, Luka found his heart racing. Two months had passed and while they had spoken on the phone, they had limited the conversations to casual talk about Joe, the weather, and day to day activities. Some would say they were avoiding the inevitable, but, how could they say what needed to be said without seeing each other's faces, How could he not look into her eyes as she promised that this time things would be different. There'd been no promises, not yet anyway, those would come, or at least he hoped they would, but, he had told her that he said he could no longer live a life where honesty was not a part of all they did, could she accept that?

His face lit up as he saw the small brunette clear customs and as he stepped into view from behind the others awaiting arriving passengers her hesitant smile matched his. Today would be the end of the secrets between them. It had to be.
============================
Note: For those regular followers of the series ER, you will know that there was one secret that Abby had yet to reveal to Luka as this piece ends, one in fact that would very nearly cost them their marriage before we received our happy ending.

My thanks to the mun behind the_countmc on Live Journal for the idea behind this post, I hope they enjoy the end result.
Posted by AzizalSaqr at 7:24 PM