Prompt 280: What do you think?/Theatrical Muse 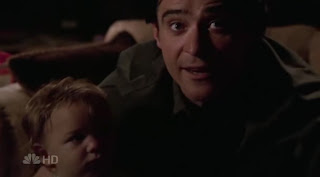 "What do you think?" Luka looked up from the journal he was reading as his wife asked the question.

"Hmm? Of what?" His expression shifted to one of puzzlement as he realized that he honestly had no idea of what the woman was talking about.

"You weren't even listening were you?" Abby poured milk over the cereal in Joe's bowl before placing it in front of the toddler.

"Um, sorry, I'm trying to get caught up." Reaching for a second journal, the Croat tucked the second inside the first to use it as a bookmark before setting it aside.

"Tell me again." Pushing himself up off the chair, he made his way over to the short counter that separated the living-room from the kitchen.

"I don't know if I'm ready to let you off that easy." Abby tilted her head slightly as she debated how long she wanted to continue the give and take.

"Hey, that's not nice." As he stood beside his son, Luka found himself unable to resist stealing a piece of cereal from the boy's bowl, and as he popped it in his mouth, he gave him an exaggerated smile.

"Well, that's what happens when you don't listen the first time." As Luka settled next to Joe, Abby couldn't help but smile, the moment for the two of them now passed.

"Yum, good stuff, Joe." Pleased at the attention turning toward him, the soon to be three year old, fished another Cheerio out of the milk and offered it to his father.

"Thank you, Joe." Leaning toward him, Luka accepted the bite, then reciprocated by offering a kiss in return.

"That's enough for me, now, you eat your cereal."
Posted by AzizalSaqr at 1:48 PM