January Prompt 004: Violence is not the answer, but it is a bloody good guess. Anon/Artistic License 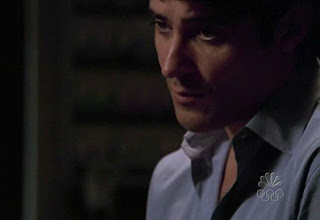 The adrenalin was still pumping as Luka made his way out of the bar. He could have killed the man, he should have. He'd done it before with the mugger, let his rage, his need to protect someone blind him from seeing anything but stopping the person. Even having made the threat that he'd come back for Brian if he ever went near Abby hadn't been enough to squash the deeper feelings. Even now with his hand aching from the blows, he couldn't shake the feeling that he hadn't done enough. Even there, among all those witnesses, the only thing that had registered with him was the knowledge that he wanted the man dead before he could hurt anyone else the way he had hurt Abby. Why then had he stopped? Why had he failed her?

The sudden rush of images flooded his brain with such intensity that it forced bile to rise. Bracing his hand on the building's rough bricks, he gave in to the momentary weakness until he had nothing left to give but dry heaves. Seeing Abby's face for the first time, the bruises, her humiliation at having to go through the rape exam. Brian had stripped everything from her with his attack and in that instant he knew he couldn't just stand by and do nothing. He had stolen the sense of security that she should find her own home and he'd robbed her of the strength that had allowed her to overcome all the obstacles that life threw in front of her. The woman he'd seen sitting on that gurney, the woman whose injuries he'd examined was only a shell of the Abby he continued to love.

Pulling back from the building he found himself staring at the door to the bar as if he expected Brian to come walking out at any moment. What was it going to take for him to shake the emotions this man's actions had reawakened in him. Reawakened. That really was what it was all about. He hadn't been able to explain it when he'd killed the mugger, but he'd known there was more to it then just the mugging, something that had fueled an almost primal rage that was beyond his ability to control. In time he realized it wasn't only because the man had chosen to attack he and Abby that he'd lost his life that night. No, there was a deeper reason, one that he didn't want to acknowledge until he had no choice. That man had died not just for his crimes, but for those done all those years ago to Danijela and their children. He hadn't been able to to claim revenge to those responsible for his families death in Vukovar. No, the ones who had taken their lives would forever be faceless strangers, but the anger he felt toward them was still there, tucked away, waiting for the day it would be unleashed. The mugger was just the first to feel it's wrath, and he died not just for his sins, but, for those committed by those faceless strangers. Tonight had been Brian's turn.

He'd never know why he'd stopped short of killing Brian, just as he would never know if the rage would reappear. No, only time would reveal that answer, and all he could do until then was try to come to terms with the feelings, make peace with them, and hope that if they ever surfaced again he could somehow control them.
Posted by AzizalSaqr at 2:28 AM