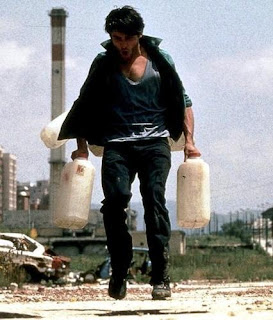 A companion story to Ghosts

Laying on the grass with his head in his wife's lap, it would have been easy for Luka to surrender himself to sleep.  Alenka's gentle stroking of his hair, the warmth of the sun as it kissed his face, the comfortable fullness of lunch.  With a sleepy smile he opened his eyes and let them settle on hers.

"Can't sleep?"  Alenka returned his smile with her question without stilling her hand.

"If I do we could be here for the rest of the day."  His words held a hint of truth amidst the teasing.

"I'm sure the children wouldn't mind."  At the mention of the two Alenka pulled her attention from her husband, assuring herself the duo were content in their play.

"What are you thinking about?"  His question came quietly as he sensed a change in her manner.

"Nothing really."  Alenka returned her focus to him.  "No, that's not true...did you expect the trip to be like this?"

Luka shook his head before shifting slightly to make himself more comfortable.  "I thought it might be harder for you, I know it was for me the first time I came back."  He swallowed before lifting one hand to massage the bridge of his nose as the memory surfaced.

He was aware of his fathers arm around him, aware that without a word having been spoken between them the older man had sensed the potential of his son's collapse. "I can't do this."  Luka's voice wavered under the strain of the admission.

"You can and you will."  Josip Kovac's voice held a gentle firmness to it.  "Luka, you have to find a way to put some of your grief to rest.  Just because you lost them doesn't mean your life has to stop."

"It already has."  He found his eyes returning to the building that stood fresh and new where, in his eyes, his own life had ended.

"No, you just think it has.  You'll see, the pain will grow duller and duller as you move on, one day you'll even find you can go without thinking about what you've lost."  As if to emphasize what he was about to saw the man moved to block his son's view of the building.  "Luka, there will come a time where you'll be happy again and God willing, you'll find someone else to love as much as you loved Danijela."  He shook his head to silence his son's protest before he finished.  "I know no one can replace Danijela, or your babies, but you'll find room in your heart for another family if you'll let yourself."

How hard had it been for his father to say those words?  At the time he hadn't believed it possible, and he had told the man so with words meant to sting.  His father had persisted and over time there were moments when the pain of loss left him.  Small moments at first, then minutes, eventually he was allowed the luxury of even an hour.  His healing came slowly as he knew Alenka's must have as well and it was those memories he found himself sharing as he lay in that midday sun.

"I wish I would have known your father better, that the children could have known him."  Alenka's voice held the disappointment of unfulfilled dreams.

"I know, so do I." Luka lifted his hand so that he could touch his wife's face.  I remember how excited he was when he knew Danijela was first pregnant, and later when she was carrying Marko."  His voice grew quieter as the long repressed memories surfaced.  "He would send small presents in the mail for her, for the children..."  He paused as a wave of sadness dared to taunt him.

"He must have spoiled them terribly."  Alenka smiled both to his touch and as a response to the turn of the conversation.

Luka nodded as the sadness receded slightly, making room for happier memories.  "He did, not with expensive gifts, more like little treats...and when he saw them.."  His words trailed off again.

"I'm not..."  He couldn't help but smile as he stopped himself mid-protest.  "Well, maybe."  He had never seen himself having that in common with his father.  "I never realized how similar we were...but maybe it's because I'm more aware now of how fragile the time with them is now."

Alenka found her smile matching his as he spoke.  "You're a wonderful father, Luka...I know you always were, never let yourself believe anything else."

Luka wet his lips in preparation of answering.  "I think about all the times I missed with them because I was in classes, or working.  I think about how differently I would have done things if I had been able to imagine they would be gone..."

"Shh..."  Alenka lay her fingertips on his lips to silence him.  "You didn't know that though, anymore then I could know that I would lose Neven.  You gave them everything you could and you loved them every minute they were alive.  You can't blame yourself for what you had to do...you were trying to make a better life for them."  As she finished Alenka lowered her head so she could kiss his forehead..  "You were a wonderful father to them, and you're a wonderful father now...never doubt that."

"Tata!"  Maja's call ended the conversation and as he heard it Luka sat up, his eyes quickly searching his daughter out.  As he caught sight of her and Juraj kneeling nearby he exchanged a puzzled look with Alenka, then rose.  The fact that the call was not repeated eased his initial fear that one of the two was injured and replaced it instead with curiosity.

"Do you want to come along?"  He extended his hand with the offer, then smiled as Alenka took it.

"The way Juraj is watching whatever it is it's probably some kind of a bug..."

"Hurry, Tata!"  Maja's call was repeated though she'd neither moved closer nor farther from where her brother knelt, still intent on whatever had caught his interest despite her concerns.

"We'll soon find out."  Luka teased as he led her towards the two children.

Posted by AzizalSaqr at 5:31 PM